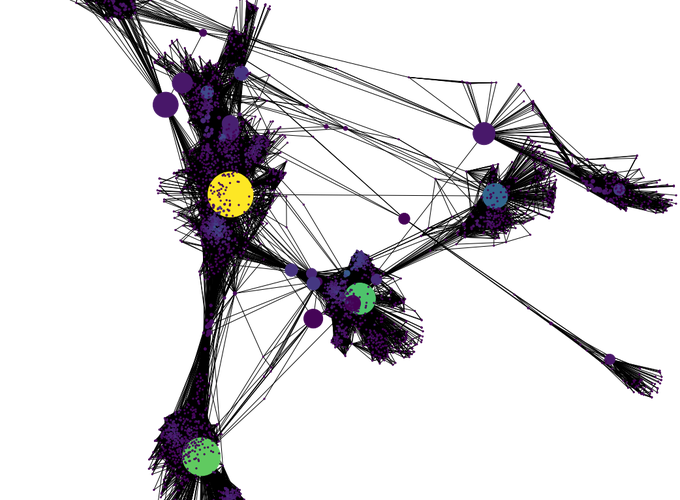 We use the module NetworkX in this tutorial. It is a Python package for the creation, manipulation, and study of the structure, dynamics, and functions of complex networks.

If you work with Anaconda, you can install the package as follows:

Each network consists of:

Now we visualize the network with the draw_networkx() function. 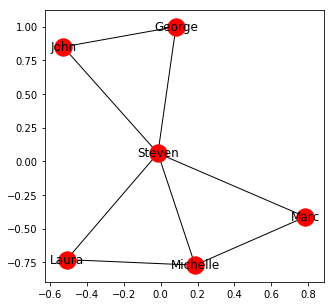 If A is the child of B, then B is not a child of A. Such a network where the relationship is asymmetric (A is related to B, does not necessarily means that B is associated with A) is called an Asymmetric network.

We can build the asymmetric network in NetworkX using DiGraph method, which is short of Directional Graph.

To make sure that all nodes are distinctly visible in the network, use the spring_layout() function, followed by the draw_networkx() function. 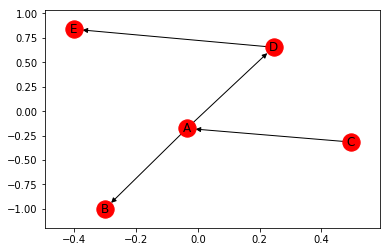 Till now we had networks without weights, but it is possible that networks are made with weights, for example, if in our initial network we consider the number of projects done together as a weight, we will get a weighted Network.

Let us make one again of the employees, but this time we add weight to the network, each edge has a weight signifying the number of projects they have done together. 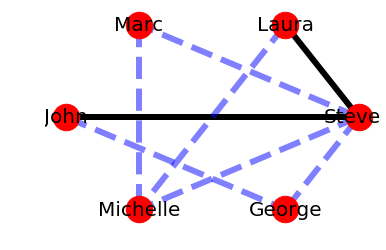 We can determine the clusters of a node, local clustering coefficient, which is the fraction of pairs of the node’s friends (that is connections) that are connected with each other.

To determine the local clustering coefficient, we make use of nx.clustering(Graph, Node) function.

Degree of a node defines the number of connections a node has. NetworkX has the function degree which we can use to determine the degree of a node in the network.

This will return a value of 3, as Michelle has worked with three employees in the network.

We can find the distance of a node from every other node in the network using breadth-first search algorithm, starting from that node. networkX provides the function bfs_tree to do it.

And so if you use M = nx.bfs_tree(G_symmetric, 'Michelle') and now draw this tree, we will get a network structure telling how we can reach other nodes of the network starting from Michelle . 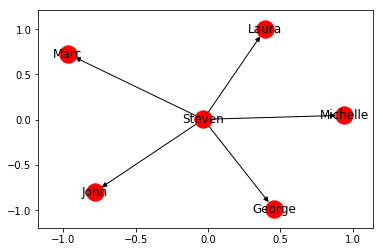 Eccentricity of a node A is defined as the largest distance between A and all other nodes.

Above we learned some of the network distance measures and they are useful in knowing how the information will spread through the network.

In this section, we will learn how to find the most important nodes (individuals) in the network. These parameters are called as centrality measures. Centrality Measures can help us in identifying popularity, most liked, and biggest influencers within the network.

The people most popular or more liked usually are the ones who have more friends.

Degree centrality is a measure of the number of connections a particular node has in the network. It is based on the fact that important nodes have many connections. NetworkX has the function degree_centrality() to calculate the degree centrality of all the nodes of a network.

Eigenvector centrality is a measure of how import a node is by accounting for the fact of how well it is connected to other important nodes.

We can use the eigenvector_centrality() function of NetworkX to calculate eigenvector centrality of all the nodes in a network.

The Google’s Pagerank algorithm is a variant of Eigenvector centrality algorithm.

Closeness Centrality is a measure where each node’s importance is determined by closeness to all other nodes.

The Betweenness Centrality is the centrality of control.

It represents the frequency at which a point occurs on the shortest paths that connected pair of points. It quantifies how many times a particular node comes in the shortest chosen path between two other nodes.

The nodes with high betweenness centrality play a significant role in the communication/information flow within the network.

The nodes with high betweenness centrality can have a strategic control and influence on others. An individual at such a strategic position can influence the whole group, by either withholding or coloring the information in transmission.

Networkx has the function betweenness_centrality() to measure it for the network. It has options to select if we want betweenness values to be normalized or not, weights to be included in centrality calculation or not, and to include the endpoints in the shortest path counts or not. 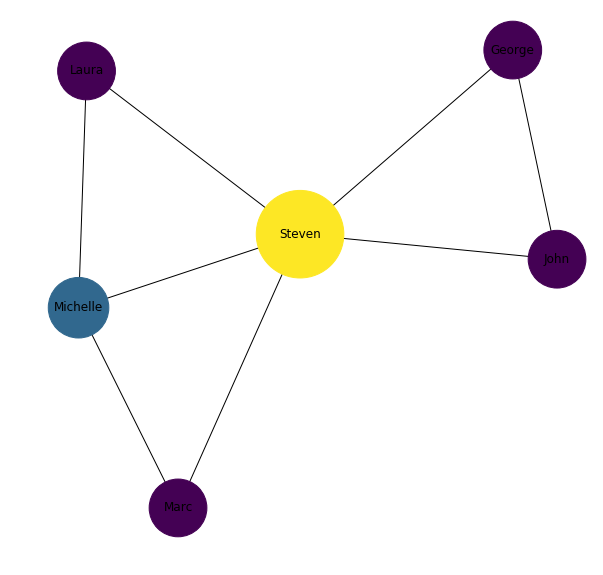 Facebook data has been anonymized by replacing the Facebook-internal ids for each user with a new value. Also, while feature vectors from this dataset have been provided, the interpretation of those features has been obscured. For instance, where the original dataset may have contained a feature “political=Democratic Party”, the new data would simply contain “political=anonymized feature 1”. Thus, using the anonymized data it is possible to determine whether two users have the same political affiliations, but not what their individual political affiliations represent.

Let us start with the Facebook data, for our analysis here we will use Facebook combined ego networks dataset, it contains the aggregated network of ten individuals’ Facebook friends list. You can download the required facebook_combined.txt file from the Stanford University site.

We read in the file and construct the Graph:

We can also visualize the network such that the node color varies with Degree and node size with Betweenness Centrality. The code to do this is: 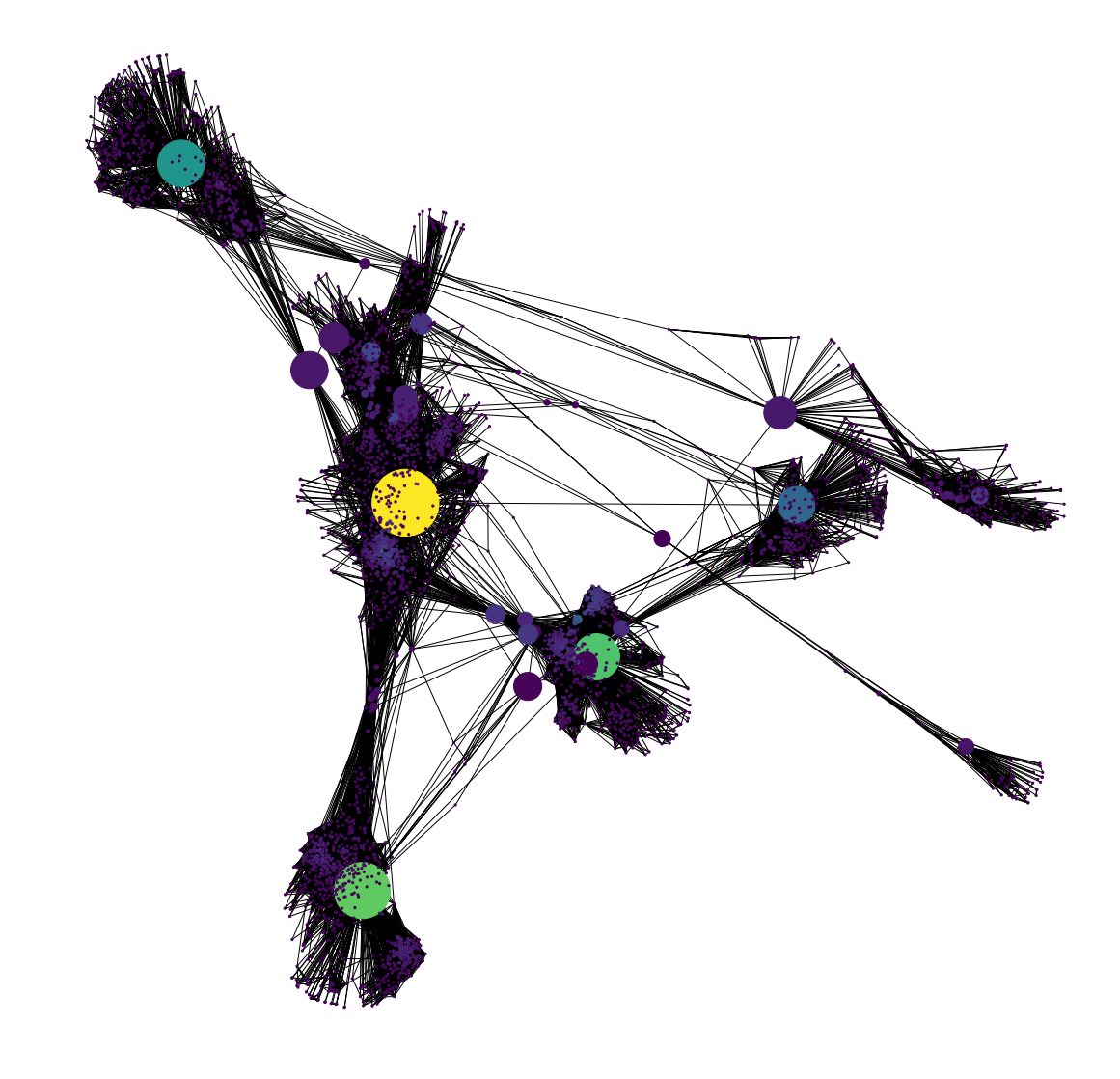 You can also know the labels of the nodes with the highest betweenness centrality using:

We can see that some nodes are common between Degree Centrality, which is a measure of degree, and Betweenness Centrality which controls the information flow.

It is natural that nodes that are more connected also lie on shortest paths between other nodes. The node 1912 is an important node as it is crucial according to all three centrality measures that we had considered. 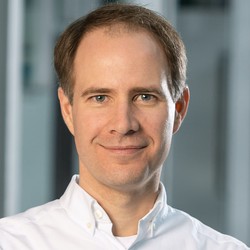